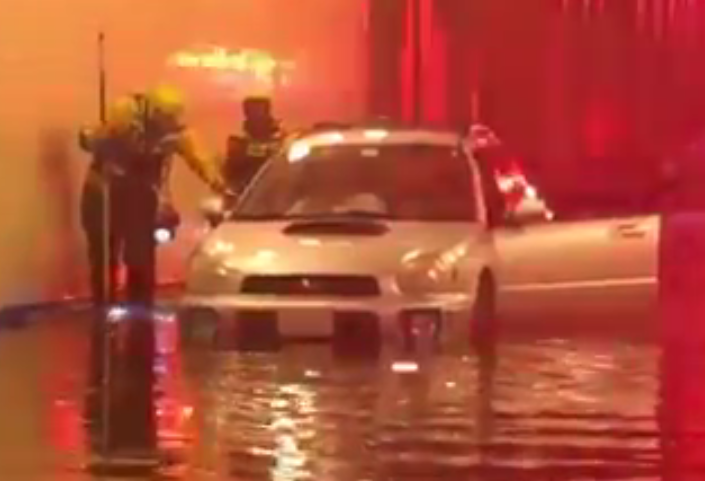 On the evening of Saturday, August 12, the National Weather Service issued a severe thunderstorm warning for the Metro Area. Within 15 minutes, the Capital Weather Gang reported “A solid wall of very heavy rain accompanied by vivid lightning and booming thunder is plowing through the District and close-in suburbs. There may also be some pockets of damaging winds. The storms will take about 45 minutes to pass.”

As it turned out, 45 minutes was more than enough time to cause flash flooding on many DC streets. It didn’t help that it had also rained the night before and the ground was already saturated. DC Fire and EMS reported they had to make high water rescues in the 600 block of Rhode Island Avenue, NE.

Data from gauges in the heart of the city showed that the rain was coming down at a rate of almost 4 inches an hour in some neighborhoods, with the greatest intensity recorded over a 20 minute period. The unrelenting rain was reminiscent of the multiple storms that flooded the Bloomingdale neighborhood in the summer of 2012.

The good news is that the First Street Tunnel – built in response to those 2012 storms – did its job on August 12, capturing approximately 1.8 million gallons of combined sewage that might otherwise have flooded streets and basements. Another 1.7 million gallons was captured at the McMillan Stormwater Storage site – also added after the 2012 floods. There were no reports of flooding in the vicinity of the First Street Tunnel or the McMillan facility.

We wish that was the end of the story, but it’s not. Even though the First Street Tunnel performed admirably, the August 12 storm exposed other weaknesses in the District’s sewer system, which dates back to the late 1800’s. In the Northeast Boundary Drainage Area, all the rainwater and sanitary sewage flows into one large pipe, known as the Northeast Boundary Trunk Sewer. It is a huge sewer – 23 feet high – but during extreme storms it can fill to the top in 15 minutes. When that happens, there is nowhere for the rainwater flowing out of gutters and running down the streets to go. So, it comes back out of catch basin and manhole covers, or worse, floods people’s homes and businesses.

Our 24-hour Command Center was inundated with calls for customers reporting just that. The map below shows where most of the incidents occurred - more than 6 dozen and counting. 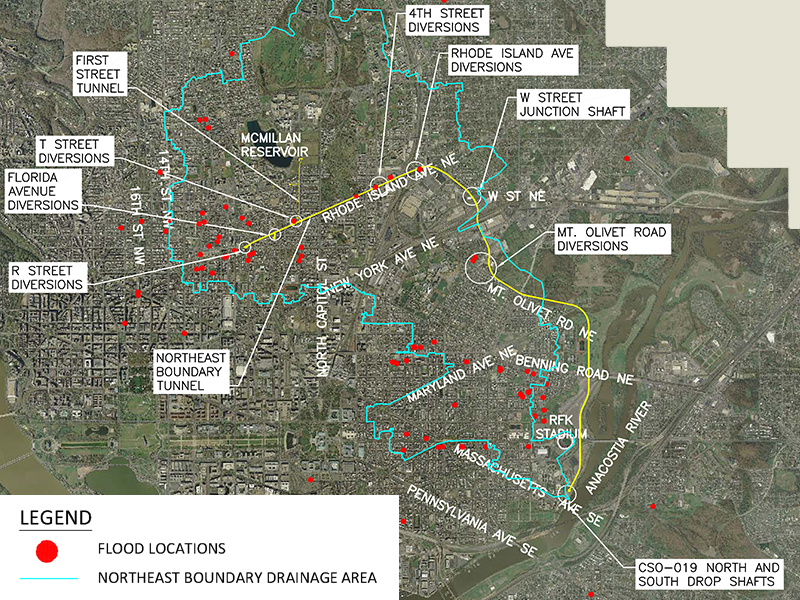 For many of these residents, relief is on the way, just as the First Street Tunnel has vastly reduced the risk of flooding in Bloomingdale and LeDroit Park. This fall, DC Water will begin construction on another new tunnel, the Northeast Boundary Tunnel (NEBT). That project will add capacity for millions of gallons of combined sewage, to prevent flooding in the places impacted by the August 12 storm, and to reduce overflows into the Anacostia River during heavy rains.

The reality is that there is no tunnel that is big enough to guard against every storm imaginable. There could always be a bigger storm that mocks the infrastructure we’ve built to manage stormwater. But the flooding on August 12 would have been even worse without the investments DC Water and the District have already made, and we will be even better prepared for torrential downpours when the NEBT is completed in 2023.

To read more about the project, please visit dcwater.com/NEBT

You can also prepare for potential flooding by reviewing your insurance coverage. The DC Department of Insurance, Securities and Banking (DISB) has helpful information on its website at disb.dc.gov/page/evaluate-your-need-flood-insurance and disb.dc.gov/page/five-reminders-about-your-insurance-coverage 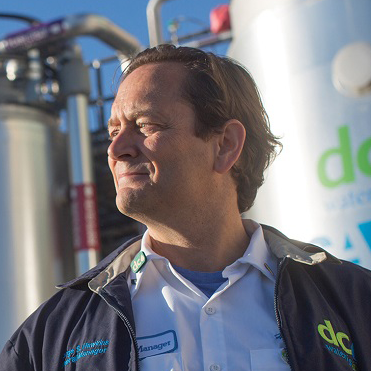 George Hawkins serves as Chief Executive Officer and General Manager of DC Water. Mr. Hawkins is transforming DC Water into an innovative, customer-oriented enterprise. DC Water has been the recipient of almost every major award in the industry, including most recently, the 2016 US Water Prize for its resource recovery efforts.

In addition to his work at DC Water, Mr. Hawkins serves on numerous boards and commissions, including serving as a Board member of the North American Electric Reliability Corporation since 2015. President Barack Obama appointed Mr. Hawkins to the National Infrastructure Advisory Council (NIAC) in August 2016.