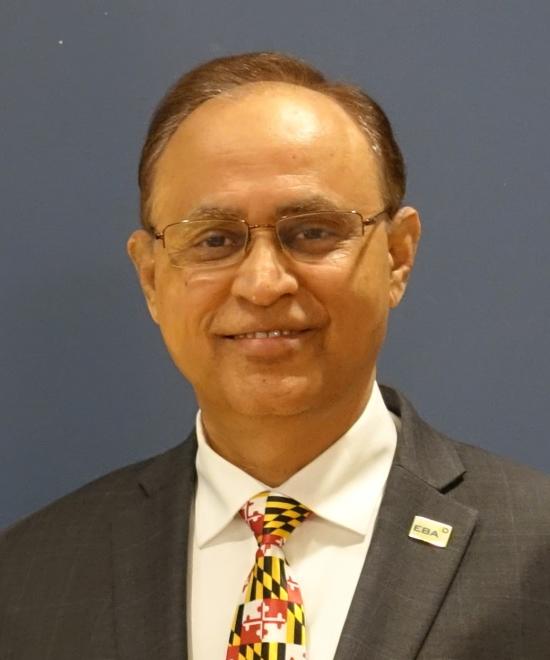 As President and Chief Executive Officer of EBA, Rizwan is responsible for the firm’s overall administration and management and serves as EBA’s client liaison. During his more than 30-year distinguished career in engineering, Rizwan supervised a variety of complex and challenging projects. He is recognized equally by his clients and colleagues for his leadership, quality designs, rapid response, and exceptional customer service. Before becoming President of EBA, Rizwan was instrumental in establishing and overseeing the firm’s Water Systems Engineering Department.

Rizwan is a registered professional engineer in the state of Maryland and District of Columbia and a graduate of Virginia Tech, where he earned his master’s degree in civil and environmental engineering.

He has held leadership positions in a variety of professional associations and is currently serving a three-year term on the Maryland Transportation Commission. He is also the Immediate Past President of the American Council of Engineering Companies/Metro Washington (ACEC/MW).

In 2011, Maryland Governor Martin O’Malley appointed him as the Commissioner for the Maryland Higher Education Commission (MHEC); he was reappointed by Governor Larry Hogan in June 2018 for another 5-year term. In 2008, he was appointed by Governor O’Malley to serve on the Science, Technology, Engineering and Mathematics (STEM) Task Force to create a statewide plan to maintain Maryland’s competitive knowledge-based economy.

In 2016, he served on the Commission to Modernize State Procurement, created by Maryland Governor Larry Hogan to improve the state’s procurement process and increase efficiency.

Rizwan is actively involved in community service and in 2012 received a “Community Service Award” from Governor O’Malley to recognize his leadership.

At the ACEC 2018 Fall Conference in Las Vegas, Nevada, Rizwan presented on leadership and discussed how firms can create a great place to work while achieving financial success. Click here to view his presentation. He also regularly contributes to EBA’s blog on topics such as business development, smart cities and geospatial technologies, and green energy.